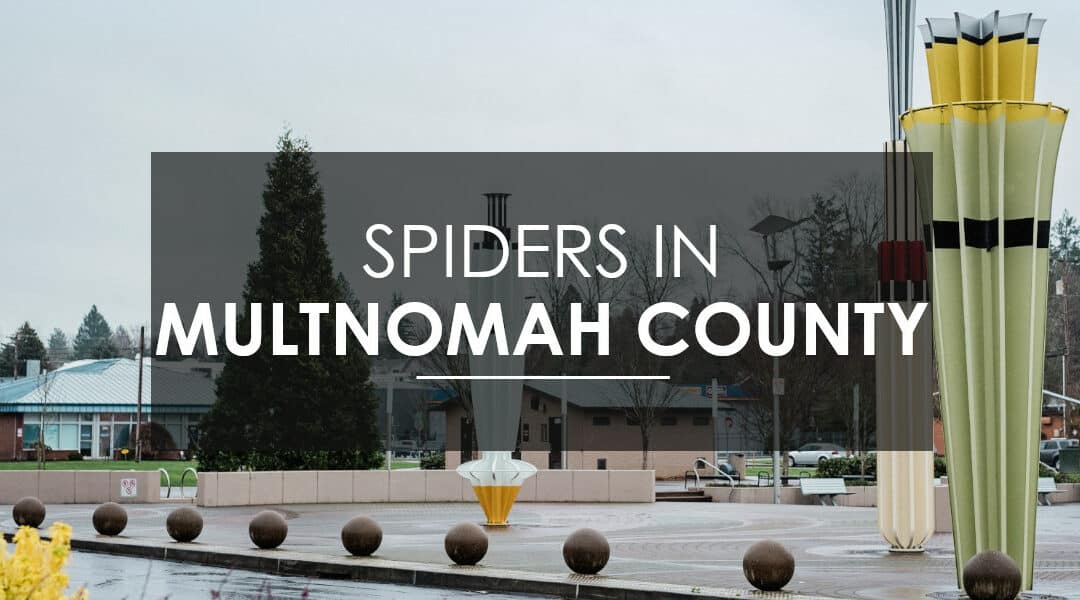 How do you feel about spiders? If they don’t give you the creeps, odds are that you have friends or family who VERY MUCH do not like spiders. In fact, it’s reported that some 95 million Americans — nearly 30 percent of our population! — experiences some form of arachnophobia, the fear of spiders. Broken down even further, it’s estimated that approximately one-third of all women and one-quarter of all men in the United States have a fear of spiders. That’s a significant number of people to share such a fear.

And here’s the thing: there really isn’t much to be afraid of. In fact, in many respects, spiders are…actually good. (We’ll get to the benefits of spiders later.)

What to know about spiders in Multnomah County

What is it about them that strikes fear into the hearts of so many of us? Is it the lore that surrounds them in stories and movies? Their webs? The creepy crawly way they move their bodies? (Spiders have 48 knees — six per leg!) It might be all of these things. And it might be something else altogether. Regardless, people have a legitimate fear of spiders, and regardless of whatever positive PR campaign some might tout on behalf of these misunderstood arachnids, spiders are pests, and if they are pestering you and your loved ones, you deserve kid- and pet-friendly solutions that help you focus on the things you truly enjoy spending your time doing.

According to the Oregon Department of Agriculture, of the estimated 35,000 types of spiders in the world, approximately 3,000 of those can be found in the United States. Of those 3,000 varieties of spiders, the ODA has identified only one of the 500 that live in the Pacific Northwest as being potentially deadly to humans, and that would be the Black Widow spider, a black spider whose distinct, red hourglass-like figure on its back makes it easy to identify.

Luckily for those of us in Multnomah County, the black widow isn’t usually found in this region. These creatures prefer the more arid climates of Eastern Oregon. (It’s important to note that Washington State’s Department of Health has also identified the Yellow Sac spider as being potentially fatal to humans, but, like the Black Widow spider, the Yellow Sac is typically found in desert climate regions of Eastern Washington vs. the more temperate climates found on the western side of the state.)

If you happen to come across these types of spiders, steer clear. And if you or a loved one is bitten, we advise that you seek medical attention immediately. Though time is of the essence, if you are able to capture the spider so that medical professionals can examine and verify the specimen, then all the better. If not, then that’s okay — see a doctor, and right away!

(NOTE: It’s important to understand that all spiders are venomous, but most that we encounter do not pose any substantial threat to humans or pets. However, if you or someone you love has an allergy, seek medical attention immediately as advised by your healthcare professional.)

How to treat for spiders in Multnomah County

Why exactly have spiders made their way to your property to begin with? In a word: food. That’s right, your home and property likely contain a wide variety of insects that have attracted the spiders to your dwelling. So, how do you get rid of ‘em?

Here’s what’s ironic: eradicating spiders from your property more often than not is done by exterminating other pests from your property! Spiders, as we mentioned earlier, are arachnids. They’re more closely related to creatures like scorpions or ticks than they are insects, the latter of which are their primary source of food. Spiders love to feast on roaches, mosquitoes, flies, moths, earwigs, and beetles. Spiders can be very helpful to the environment and to the agricultural sector because they feed on many of the types of insects that threaten our food supply or can be considered just a general nuisance to be around if you’re trying to entertain outside or just live your day-to-day life with your loved ones. So how do you get rid of all of them — spiders and insects?

The trick is, you can’t treat for spiders and insects in the same way, and treating for both is almost always more effective if you want your home to be pest-free.

Insects are simpler to treat because the types of baits we use are distributed in a manner that causes them to both ingest them while spreading them throughout their colony. However, unlike with insects, these extermination techniques are not effective with spiders as they do not lick their legs to clean themselves. Therefore, the bait is neither ingested or spread in any worthwhile manner.

We recommend treating for insects on a quarterly basis to disrupt nesting patterns and to cut off the food supply that the spiders have become dependent upon. No food, no spiders. Eventually. But we don’t recommend only treating insects to eradicate spiders. This technique covers food, but we also recommend using a technique that covers shelter. Namely, web removal. Seems simple, right? But it’s incredibly effective. Spiders are diligent web spinners, spending a great deal of time constructing their webs. Cutting off their food supply and regularly treating for webs (we recommend the same quarterly schedule) will get spiders out of your life in no time.

By vacuuming areas inside and outside of the home, such as the small gaps in decking and siding, attics, sheds, high corners, garages, eaves, and other areas that might go unnoticed and untouched for long periods of time, you’re limiting the areas that spiders prefer to spin their webs and lay their eggs. At Aspen Pest Control, we’ll treat and remove all accessible webs located on your first and second story eaves.

As specified above, our approach to treating homes and properties for spiders relies on the best-practice of removing the variables that make spiders want to live on or near your space. Web removal, for instance, requires special equipment that poses no danger to your children or to your most-precious furry friends.

When it comes to insect treatment, we offer a variety of products — insecticides, baits, and other chrysanthemum-derived products — that are 100% guaranteed to be safe and effective for you and your loved ones.

At Aspen Pest Control, we pride ourselves in delivering the best pest control services in the greater Multnomah Country region. Your friends and neighbors choose us because we understand pest control isn’t something people realize they need until they really need it, and in those challenging life moments, having service they can trust is of the utmost importance. We believe your life should be worry- AND pest-free. That’s why we guarantee our services.

Spiders are amazing, fascinating creatures, but they do not belong in the home or in areas where they’ll make people feel uncomfortable. Call Aspen Pest Control today for your free estimate, and learn how homeowners in Multnomah County are living spider-free with our safe, effective, and kid-, pet-, and environmentally-safe approach to pest control!

Our pest control experts love sharing tips and tricks for keeping pests out of your home or business in our Pest Control Blog. Have questions? Contact us today and get a free consultation!